Erin has been studying movement for the majority of her life, starting with her equestrian background. She began with professional Dressage training in 1992. She went on to train and show Arabian Horses in Hunter-Jumper, Western Pleasure, Competitive Trail, and Endurance.

Through a friend, Erin discovered and began professionally training in the cow horse industry in 1998. She trained, showed, and bred her Quarter Horse and Paint reining and cutting horses for 14 years. Erin credits her Pilates for her ability to maintain her equestrian training and lifestyle.

Erin has over 20 years of Pilates experience. In 1997 she began Pilates with Master Pilates Teacher, Educator, and Author Elizabeth Jones-Boswell at her Physical Conditioning Center in Houston, TX to rehabilitate 2 herniated discs in her back.  In 2003 she again rehabilitated her cervical spine with Pilates after an injury. It was her instructor, Rosa McGill of Premier Pilates in Cypress, who first approached her to consider becoming an instructor.

Erin considers herself a constant and is continually studying and training with her Pilates work to grow as a student, as well as a teacher of the Pilates method. She is currently working on her prerequisites for the transition program for her Polestar Pilates certification. 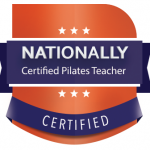